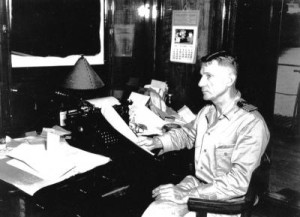 Adrianus (or Adrian) trained with the Merchant Navy School in the Netherlands, where he learnt much about navigation (astro using sextant), ship load distribution, ocean currents, and meteorology etcetera.He then joined the KPM (Koninklijke Paketvaart Maatschappij/Royal Interocean Lines) on 16 December 1918 at just 20 years of age, and was on his way to fulfilling a long-held dream as a seafarer—one amongst many adventurers in this centuries’ old Netherlands’ tradition.

As the KPM was an Indies-based company, there was a requirement that Adrian transfer and live in the Netherlands East Indies. Frouwe Christina remained in the Netherlands and studied at the Conservatorium of Amsterdam from 1915–1919 where she qualified as a concert pianist before joining the Dutch Philharmonic Orchestra under the baton of conductor Eduard van Beinem.

However, when Adrian and Frouwe decided to marry by proxy on 15 March 1930, she gave up a promising career to move to the Netherlands East Indies to join her husband.

The marriage produced two children: a boy Aart Ritse who was born on 3 May 1933 in Makassar in the Celebes (now Sulawesi) and a girl, Margre Hanny, born in Medan, Sumatra on 9 March 1936.

In the early 1930s, Adrian – who was better known as Hoffie – got his command with KPM as a ship’s master and all was well until war broke out.

As part of his duties, he came to Bunbury, Western Australia on 5 March 1942 in the Van den Bosch which was declared unseaworthy by the time he got it to Melbourne.

He was then allocated the Both and subsequently sailed on it as Commodore of Convoys for the remainder of the war. (Although Aart does not know all the details, the Battle of Milne Bay also featured in his father’s experiences.)

However, Aart clearly remembers the outset of the Pacific War. The family was living in Sumatra in the beautiful little highlands town of Fort de Kock (now Bukittinggi). In the tumultuous Japanese raids, his father was given orders to take the KPM ship Elout safely out of the harbour in Padang.

He succeeded, but when the ship returned the next morning it was bombed and sank to the bottom of the harbour. He was then given three hours notice to transfer to Batavia, and the family quickly transferred whatever belongings they could gather into the car, and then left everything they owned behind them, not realising at the time that it would be forever.

There was ‘barely controlled chaos’ as they set off to the island’s southern tip to catch the overnight ferry across the Sunda Strait to Java. The car was then pushed into the sea to stop it falling into Japanese hands, but they did keep the keys as a memento! As the end of December 1941 moved into January 1942, the family arrived safely in Batavia, only to find, the very next day, that the air raid sirens were blaring and the bombs were starting to drop.

Hoffie and Frouwe had friends who owned a tea and rubber plantation in a mountain town called Soekaboemi which lay between Batavia and Bandoeng. Hoffie then made sure that his wife and two children were safely lodged there so they could escape the bombing.

When he returned to Batavia, Hoffie was given orders by KPM to take a number of passengers out to sea on his newly assigned ship, the Van den Bosch.

He had also been given sealed orders to be opened once out to sea, which instructed him to rendezvous with six others ships and to proceed in convoy to Australia.

He waited for some time and when none of the ships turned up he set off to Australia on his own.

Little did he realise that he would be separated from his family for the next four years, although he did manage to send them a message via Radio Australia that he had arrived safely.

During this time in early 1942, Aart, his mother and sister, were standing in the post office at Soekaboemi when quite suddenly the air raid siren sounded and was followed by the heaviest bombing and strafing they were to encounter for the entire war.

While a lot of people were killed and injured, the family emerged unscathed. Then they saw the arrival of Japanese troops— just the beginning of thousands they would see over the coming years. Next they were standing in the sun all day waiting to be registered and fingerprinted with nothing to eat and nothing to drink before they were moved into the first camp known as SOG (Soekaboemi Opvoedings Gesticht) or Soekaboemi Orphanage.

Aart was just ten years of age at that time and he recalls hundreds of people bedded down like sardines in a can. Little did he know that this was just the first of many more POW camps to come. Although a child, he helped to dig gardens, work in the cook-house, cart water from the well, and clean the latrines. As the effects of malnutrition stunted his growth, he was not separated from his mother and transferred to an adult male camp as were the majority of boys between the ages of 10-18.

He does remember, with great affection, his wartime part-time teacher, who risked all to teach the children when an opportunity permitted. (He was delighted to be able to thank her when he found where she lived, some sixty years later.)

In August 1945, they learned that war had ended when a Japanese Kempei Tai officer told them they were free to go. There was joy and relief yet also apprehension as the ‘bush telegraph’ had warned them of Indonesian extremists fighting for the country’s independence. They were then herded into trucks to become part of the 1,500 civilian survivors who were captive to the Indonesians in the mountains near Selabintana. Two months later, they were rescued by Ghurkas under British command. Relocated to Soekaboemi, Aart was finally able to access medical help for untreated dysentery and clearly remembers the doctor telling him, “You’re lucky to have seen me because in another month you would have been dead”. Subject to further attacks by Indonesian fighters, they were moved to Batavia and spent ten days there before boarding a Dutch army air force Dakota to be evacuated to Australia via Balikpapan, Morotai, and Hollandia.

The family arrived in Brisbane on 19 December 1945. During these years, Hoffie was working with KPM to help defend the south-west Pacific region, not knowing where his family was or whether they were dead or alive. It was only recently that Aart found – through an archival search at the National Archives of Australia – that his father had submitted an application to the Australian Immigration Department for his family to migrate to Australia. It was an act of faith, for the application was made in March 1945 when war in the Pacific was still raging.

It was another seven months  before he was to learn that they too had survived and he worked with Dutch authorities in Australia and Batavia to get them safely evacuated as soon as possible. Typically, Dutch evacuees from the East Indies could stay in Australia for some six to eight months for ‘recuperative purposes’ before they were repatriated to the Netherlands or the Netherlands East Indies. With Hoffie’s foresight, the family were able to remain in Australia as bonafide Dutch migrants on the condition that they paid a one pound landing fee.

After Aart, his sister and mother, arrived in Brisbane in 1945 they were transferred to Camp Columbia at Wacol in Queensland. They were hospitalised and spent two months recuperating, their medical bills paid for by the Dutch authorities in Australia through one of their organisations,The Netherlands Indies Welfare Organisation for Evacuees (N.I.W.O.E.).  They were then well enough to fly to Sydney where Hoffie had bought for his family a weatherboard house in the working class suburb of Kogarah.

When he first came to Australia Aart was unsettled and angry: he was 13 years old, had lost his ‘blood brother’ friends who supported him in the POW camps and found himself in a strange country with a language he did not understand. Furthermore, war and migration had interrupted his education with the result that he attended more that 12 different schools.

Yet in the midst of his own demands of survival and resettlement he remembers the stories of his father – still a KPM ship’s captain – who had witnessed the anti-Dutch Rallies staged by the Australian Trade Union Movement in support of Indonesia’s struggle for independence.

Although the unions had tied his father’s ship and refused to either load or fuel it, Aart recalls that Captain ‘Hoffie’ managed to break the boycott and sail for Java.

Their family – two boys, one girl and three grandchildren – live nearby.

Like many adult children, Aart now realises that he failed to ask all the necessary and interesting questions when the time was right.

However, his recent searches at the National Archives of Australia (NAA), have yielded much information about Captain Adrianus Cornelis Marinus Hofman, whose work in defending both the East Indies and Australia as a KPM ship’s captain has been acknowledged by Troop Commander Mills from U.S. Army Headquarters in San Francisco in 1943, The American Department of State* on 24 July 1942, the Australian Department of the Navy on 22 March 1944, and American President Harry Truman in 1945. (

There is also a letter dated 5 January 1945 from the Dutch Government in exile in London advising Captain Hofman that Queen Wilhelmina had awarded him the “War Remembrance Cross” decoration with a bar for Merchant Marine War Service (1940-1945), plus a further two bars for ‘Exceptional War Service’ in the ‘Java Sea 1941-1942’ and ‘East Asia-South Pacific 1942-1945’. These could be worn as a Service ribbon with 3 stars. He also qualified for an American war decoration – but such was the nature of the man, he never collected it.