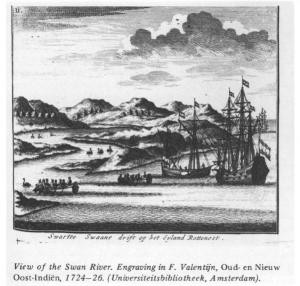 Mariners, merchants and passengers on ships belonging to the Dutch Verenigde Oost Indische Compagnie [VOC] (East Indies Company), were the first recorded Europeans to step foot on Australian soil, mainly by chance, while in pursuit of the spice trade, and largely because the instruments used to determine longitude were still in their infancy. Consequently, it was not uncommon for ships that left Cape Town for the East Indies, utilizing the Roaring Forties wind power, to travel too far east before turning north-east to Batavia(present day Jakarta), the capital of the Netherlands East Indies (NEI). Accordingly, many narrowly missed or came to grief on the Western Australian coast. Some survivors were rescued, many were not. Aboriginal oral history tradition has it that the fortunate ones cohabited with Aborigines. Evidence compelling enough to fire the imagination but not to fix as fact links the fate of those marooned when the Zuytdorp sank near the mouth of the Murchison River in 1720 to the Nunda and Walpiri peoples. Survivors from the Goede Hoop, Witte Valk, Concordia, Vergulde Draeck and Zuytdorp may also have made their lives with indigenous Australians.

Next to Queensland, Western Australia has the longest recorded history of Dutch contact in Australia, starting with Dirk Hartog who made landfall here in 1616. He left a hammered pewter plate inscribed with his name and the names of the owners of his ship to commemorate his visit. His ship’s log notes that he called the country ‘Het lant van de Eendracht’ (Harmony land) after his ship. Seven years later, on 27 July 1623, Seebaer van Nieuwelandt (Sea Baby of the New World) became the first recorded European birth in Australian waters. Delivered to Willemtgen Janszoon, the wife of midshipman Willem Janszoon of Amsterdam, he became the youngest passenger on the Leyden, the ship captained by Claes Hermanszoon, which was charting the west coast of the Great South Land.[1]

The most infamous VOC landing was that of the Batavia, which struck a reef on the Houtman Abrolhos, a chain of islands off the Western Australian coast, on 4 June 1629. For the VOC, a shipwreck was not so unusual; it happened regularly during its long history. What made this shipwreck special was the extraordinary drama that followed. The commander of the ship, Francisco Pelsaert, together with all the senior officers, a few crew members and some passengers, left the disaster site in search of water, leaving behind 268 people still alive on the wreck. The commanders’ group soon aborted the search for water on the mainland and made their way to Batavia (now Jakarta). This journey took thirty-three days. After their arrival in Batavia, Pelsaert was sent back to rescue the survivors that were still on the wreck. He arrived at site two months after leaving Batavia, only to discover that a mutiny had taken place. A group of mutineers, with Jeronimus Cornelisz from Haarlem as their leader, had murdered a total of 125 men, women and children. After a short battle the mutineers were captured. The worst offenders were executed on the island after a brief trial. The lesser offenders were taken back to Batavia to be tried. In Batavia most of them were executed, after already having been punished by flogging, keelhauling and being dropped from the yardarm. Commander Pelsaert died in the following year, leaving behind his journal of the events. This journal, together with a book written some years after the incident, ‘Ongeluckige voyagie van ‘t schip Batavia’ (The Unlucky Voyage of the Vessel Batavia), made it possible to rediscover the wreck. In 1972 the Netherlands transferred all rights to Dutch shipwrecks on the Australian coasts to Australia. Various items, including human remains, which were excavated, are now on display in a museum in Fremantle, Australia.The visible legacy of early VOC encounters with the WA coastline is also found in geographical names such as the Swan River, named by Willem de Vlamingh in 1696, Rottnest, Leeuwin, Dirk Hartog Islands, Houtmans Abroholos, and the Geelvinck Channel.[2]