Richlands, Inala and neighbouring suburbs are located in the south-west of Brisbane, Queensland. The History Group was formed in 1996, incorporated in 2000, and has become a force in the local area. Our objective is to further the appreciation of our history and diverse cultural heritage amongst our local community and the general public. We focus on the areas of Richlands, Inala and the surrounding district – including Wacol, Darra, Durack, Doolandella, Forest Lake, Ellen Grove, Carole Park, Willawong and Pallara. 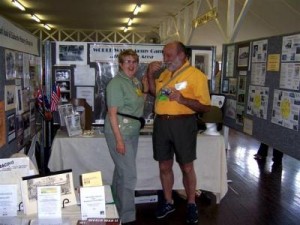 There are strong Dutch links in the history of this district, focusing on:

World War 11 in Brisbane saw many troops and military camps in our local area – Dutch, Indonesian and American soldiers as well as Australians.

Soon after the American troops arrived in Brisbane in December 1941, land was chosen in the Wacol­ area for Camp Columbia, a staging camp for up to 5000 men. At this point in time, Wacol was just a tiny settlement on the railway line halfway between Brisbane and Ipswich.

By February 1942, NEI troops and airmen were arriving in Brisbane from the fall of Batavia, and when the Americans moved their HQ to Hollandia (PNG) in 1944, the Wacol camp was offered to the Dutch.

The Wacol camp became a pivotal part of the Dutch military presence in Queensland.

And the Netherlands East Indies (NEI) Government–in-exile was based at Wacol in 1945.

This is a fascinating element of the local, national and international history of the time!

Our website presents some information, and we hope to find more from readers of this Dutch site.

In the post-war years, part of the Wacol Army Camp was converted to a Migrant Centre, and received many Dutch evacuees and migrants.

Many immigrants later settled in nearby suburbs, and contributed to the development and culture of those suburbs: the Dutch were strong in Richlands and Darra.

NESWA Queensland is still based in Richlands, so the Dutch connection continues to this day. 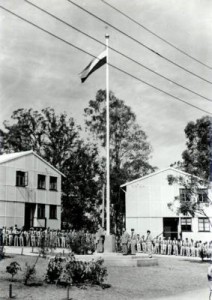 The Dutch flag flies at Wacol camp as Van Mook addresses NEI troops, 1945. (Source RNLA) – as far as we know…

“World War II stories from Brisbane’s South West” – published in 2006. Although there were NEI evacuees in Wacol, we found only one story to represent the Dutch presence. (Excerpts will be on our Website soon, and we are still collecting WWII stories).

“Darra by Decade” – a project for 2007. Darra was the closest suburb to the Migrant Centre, so the 1950s saw numbers of Dutch families settle there.

Local Immigrants – Our district has 74 cultures at this time, and we plan a future collection of interviews to bring more immigrants’ stories to our local community.

Help record the Dutch history of the Richlands Inala district:

We invite submissions from anyone with stories of our local area.

We will visit and interview locals, and write up your story.

Or you may like to become a member, and do your own research.

We welcome any involvement in the Dutch elements of our projects.