The National Archives of Australia (NAA) office in Perth holds inwards and outwards passenger lists for the port of Fremantle and other ports in Western Australia – including Albany, Broome, Bunbury, Busselton, Carnarvon, Cossack, Derby, Geraldton, Onslow and Port Hedland, Point Sampson and Wyndham and Perth airports.

As Fremantle was often the first port of call for passenger ships from Europe, many of the Fremantle arrival lists also contain the names of ‘in-transit’ passengers who were intending to disembark at later ports.

Holdings of inwards passenger lists for the port of Fremantle date from 1898 and are available as microfilm (1898–1963) or as original records (from 1964). Copies of the microfilmed lists are also held by the National Archives reading rooms in Canberra, Sydney and Melbourne, and the J S Battye Library, Perth. A list of passengers arriving at Albany between 1873 and 1925 is held on microfiche. The list was compiled from passenger records held by the National Archives and the State Records Office of Western Australia by the WA Genealogical Society. Copies are also held by the library of the WA Genealogical Society and the Library and Information Service of Western Australia (LISWA).
Outwards passenger lists for the port of Fremantle date from 1898, though there are gaps in the holdings for the years 1915–20 and 1935. Aircraft departure lists date from 1958. Passenger lists for the period 1898 to 1910 record outwards passengers departing for overseas, interstate or intrastate destinations. After 1910 the lists include only passengers travelling overseas.

The NNA Perth office also holds microfilm copies of the inwards passenger lists for various Queensland ports (1852–1964), Newcastle (1865–81), Darwin (1898–1934) and Melbourne (1924–64). Related records such as nominal rolls, crew lists (from 1897) and ships registers (inwards and outwards) for Fremantle and other Western Australian ports from 1898 are also held.

Instructions for searching for passenger records in Perth and Brisbane collections

Click on the yellow link “search the collection” on home page

Click on “search as guest” – no need to be a registered researcher (Shortcut to this screen: http://www.naa.gov.au/collection/using/search/)

In the keyword field type in the name of the ship or a word from the name if it is a multiple word name or the first few letters and an asterisk which acts as a wild card, eg groot*. If you want to narrow the search to a particular year and you’re using a wild card in the name search you need to put the year first, eg 1951 groot* If the name is searched on in full then the year can come after the shipname, eg Sibajak 1951.

In the series field type in K269 which is the main passenger series for WA. If you’d like to search the Brisbane collection type in J25 and click search or click enter 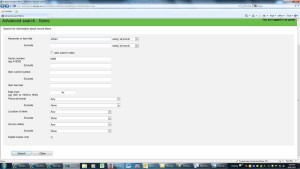 You can either scroll through the list of matches to find the relevant file and click the digital item icon if its digitised to read online or click the “digital copies only” button at the bottom of the search screen to bring up only digital matches.

Click “enter” or “search” to activate the search if you are using the digital images only search. 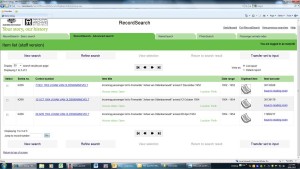