I was born 22/8/51 in Den Haag, Netherlands, where I studied horticulture being the fifth generation to do so.

After my studies I travelled the world for approx. 6 years. During this period I worked in the offshore oil industry. In 1975 I married Magda van Boheemen.After we were married travelling the world was no longer possible so I went back to horticulture in 1976.
Our two children were born in 1978 (boy named Guy) and 1980 ( girl named Esmee)

In 1982 the shire of Den Haag rezoned the area where our production nursery was, so they bought all the nurseries there. My father owned the nursery that I was managing at the time. When I suggested to Magda that this would be a good opportunity to look elsewhere and start our own business outside The Netherlands, we started to look for a place in the world where we could do this.

We looked at the USA, South America, Canada, France, New Zealand and Australia.

Through research it became quickly evident that Australia would have our preference so we traveled here to have a look in December 1982.  In March 1983 we immigrated to Perth and immediately started to set up our business (Floraco Pty ltd.).

Initially there were two other partners, but we bought them out within 2 years.

We built the first glasshouse immediately after arrival here and started to produce flowers in September 1983. From there the business has expanded to what  it now. 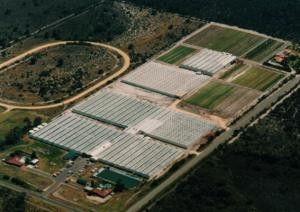 We have approx. 60.000 m² of fully computerized modern glasshouses and we employ about 80 staff. We now produce almost the whole range of flowers that is available in the Netherlands including tulips. The flowers we produce are marketed through two wholesale outlets, which are wholly owned by us. We also do all our own design, building and maintenance on the glasshouses.

We travel back to the Netherlands about twice a year as we still use a lot of different materials from there. For example, all the bulbs we use and all the young plants and seeds we use come from there as well as most of the specialized machinery.

Next year our son will take over as Managing Director of the company from me,  so he will be the sixth generation of horticulturists in our family.