In 1953 my parents and my four siblings migrated to South Australia. We initially spent six very hard months in Glossop, Berri, where we lived in an old workman’s out shed while my father was seeking house and work in Adelaide, while staying with Australian friends he had met in the Second World War.  One friend in particular was a former airforce man whose life my father had saved while working in the Dutch underground and this man was delighted to return a favour.

My mother and us kids struggled with the English language and the not-so-nice Aussi folk who introduced us to an understanding of racial discrimination!  Our task then was to learn English fast! We finally settled in Adelaide in the new migrant and working class area of Seacombe Gardens in a Housing Trust home that my father eventually bought. We were the last street on the edge of the then housing estate no fence, no garden, not a tree in sight rolling quarry indented hills in front with fields of short grassy slopes. So, with my father driving his team (us,) we built the home environment, and planted potatoes in the yard to energise the soil – or so we were told! It was only the following year the lawn was planted!  When the backyard was full of vegetables we added chickens, rabbits, pet mice, dogs, cats, budgies, (which the cat always got), a pet galah and an aviary of birds – some of which we befriended as pets, later to see them as a roast on the dinner table!!!

We settled there for eight years and attended Stella Maris Primary School and Marymount College, run by the Catholic Dominican Nuns. These schools were built in our first year at Seacombe Gardens. They were right across the road, so no more travel, as the previous school involved a very long bike ride to Brighton.I was a bright student and excelled well. I studied art and ballet outside school hours as these were not on the curriculum.  But we were able to do art and sewing when it rained and on special days!

In 1961, we moved to Glenelg, where my father had now established a successful business in cabinet making, with a workshop, machines, apprentices  and a shopfront, where he sold and advertised his expertise and wares. We moved in behind the shop, into a home yet to be finished, with so much hard work ahead, scrubbing the toxic lime off the walls and painting all anew. I continued my schooling, now having to travel by public transport that was both adventure and mischief! 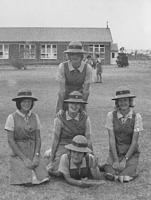 During the school holidays I worked in a Dutch cake shop at Glenelg (friends of my parents, all belonging to the DUTCH Bowling Club, and where earlier we all paraded in Dutch costumes at the Annual Glenelg Pageant). When I finished College, I stayed there for another six months to sort out my direction. I had simply no idea what I wanted to do with my career. Eventually I worked and studied as a psychiatric nurse for two years and then worked another two years as an assistant draftsman at the South Australian Lands Titles Office.

From, 1963-68 I studied many ARTS related subjects part time, including Fashion Drawing and Design at the Institute of Technology, and Craft 1 & 11, and General Drawing at the South Australian (S.A.) School of ARTS.

I then worked as a lingerie designer with Taylors of Adelaide from 1968-1971, followed by a full time Diploma of Fine Arts Course at the S.A. School of Arts. Although I majored in painting, I was given three lessons on photography, which opened up a whole new world.

See my CV for details: http://www.saatchi-gallery.co.uk/yourgallery/artist_profile//454.html

In 1973, when I was married and separated, and with a new partner, I had my first painting exhibition and began teaching part time in Adult Education, Children’s Art and Craft classes and also as a relief teacher at Secondary Schools. During that time I set up a darkroom as I had developed a BIG interest in this medium, fell pregnant, voila! baby! Got into baby pics and I was OFF! … never looked back…

I practiced and experimented and read and re-read everything I could about photography for the next two-and-a-half years and continued teaching part time while I brought up the baby.  In 1976, by accident, I landed myself in the freelancing world, through my peer group, as a stills photographer in the Film Industry! I had already been involved with experimental films but mainly in the wardrobe/set and actress departments! This was such “luck” as it helped give me the financial security to pursue my Artistic works and it was my favourite medium. It also promoted my work and soon I was working in theatre/publications/music and portraiture. This was the ’70s and ’80s which was such a very creative time in Adelaide and everyone was doing doing! And there was work!

In 1976 I had my first exhibition as an art photographer in a group show. The critics singled me out very favourably and my confidence was boosted….

In 1978 I had my first solo exhibition in Art photography. A  Great success.

Following another successful solo show in 1981, I travelled to the UK and Europe with my nine year old daughter Morgana – who is now a singer/songwriter and website designer – where I was invited by the Dutch International Theatre Research Company to undertake a major commission documenting the work of “KISS” Theatre Company during their 1982/83 world tour. We were based in Leeuwaarden and this was my first return to my native land where I was able to reconnect with all my relatives. I have now been back three times and have formed many ongoing friendships.  On my return to Adelaide, Australia, in mid-1982, I showed an exhibition of the work of Kiss Theatre Company who were also touring, in tow, at several venues. When showing in Sydney, I was very favourably interviewed and critiqued by the late great master of Australian photography, MAX DUPAIN for an article/review in the Sydney Morning Herald Newspaper [Click here to view a copy.]. Back in Adelaide I ran several Photographic Workshops and continued to freelance in the Arts and Film industry, joined a rock’n’roll band, set up a duo, and then got heavily involved in the women’s movement to promote the ARTS and women’s rights. 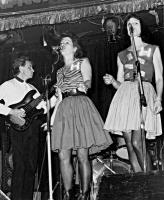 Now, by this stage I was experimenting in the darkroom with overlays (the old sandwiching technique) but only in black and white with toning and hand colouring added after.

In 1986, I moved to Sydney, New South Wales, to further my career and broaden my horizons. I had worked there in the Film Industry and had fallen in love with it!  I then bought a house and after much settling and hustling was back freelancing, but this time in the Sydney Arts and Entertainment scene of film/theatre/music/portraiture/documentation of festivals and events/and many miscellaneous commissions. In my art, I began experimenting with overlaying colour transparencies and then found myself totally engrossed in the technique and obsessed by the colour collisions and its tendency to create new dimensions with a painterly effect!  It was this medium that inspired me to fulfil my creativity, inspiration and imagination that had been so cultivated, yet frustrated, as a painter.

In 1990 I had my first solo show in Sydney which was a sell-out and was  heralded as the “Queen of Overlays”.

See http://www.saatchi-gallery.co.uk/yourgallery/artist_profile//454.html for all exhibitions and an artist statement. Below you will see two invitations to shows that are very relevant to this project.

First, the Dutch Who’s Who which was organized by THE ERASMUS FOUNDATION and the second, where I scored the cover of brochure/flyer and huge poster hung throughout Melbourne. Very exciting!! I have since travelled extensively for work and play

……And have attached an article (and cover I won) which best describes my over 30 years of freelance work and an art profile from an objective point of view. 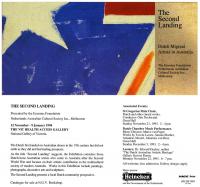 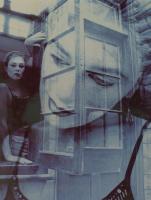 From 1995-1997, I was a Member  of the Arts Advisory Committee for Marrickville Council and in 1995 a Founding member of  the ‘Stone Villa Inc. – an Artist run space. www.thestonevilla.net

Here in Sydney, I continue to freelance with many clients in the Arts and Entertainment, Film, Music, Community Services and Documentary areas etc. 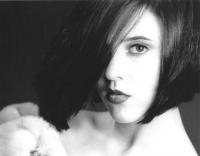 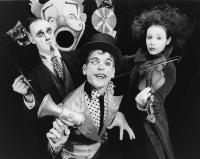 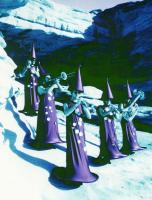 ……I am currently liasing & preparing for a new show.My art, my website:

See http://www.corrieancone.com for all exhibitions and an artist statement. Below you will see two invitations to shows that are very relevant to this project.