In the beginning: My name is Petrus Spronk, a name which got me introduced once, when I was on tour with my portable ceramic workshop in Ireland, as a one-man Rock & Roll-band. As a result I had a lot to live up to, but being in Ireland I did. When was I born? As if that is important. I was born that is the point. Not delivered by an ooievaar [stork], as my mother once told me. The place I arrived in this world was Haarlem, North Holland, and the time was Ten Minutes to Midday, confirmed by my mother when she could still remember such things. Later, this “Ten Minutes to Midday” became the title for an art project which ran from 13th October (day of my birth) 2003, till 12th October 2004.  It started in the place I now live, Daylesford, Victoria and concluded in Seoul, Korea. Yeah, it is a long story.

Early work: After being deemed not worthy of high school, for two years running, I was placed in an apprenticeship. The next best thing. “If you do not want to use your head, learn to use your hands.” Sound advice, because it was as a result of engaging the world with my hands that it started to make sense. And I in it. During 1957 my family decided to move to Australia along with thousands of other Dutch people and there I found myself in a new land with old, but very useful, fine pastry-making skills. After five years of people continuously eating my work plus the boredom of the repetitive nature of that work I decided to look elsewhere.

I looked in at the local Art School (Adelaide) and, once observed the scene, signed up and never ever, even for one hungry minute, looked back.

I felt that I had finally arrived home.

Time for art and travel.

Four years at Art School and a degree and post Grad studies later I was let out into a world which, in the main, did not think art of any importance.  Never mind.

After I taught for a few years (two years at Secondary [back at high school and it still did not suit me] and two years at W.A. School of Art, followed by a year in a school of my own creation.**)

I figured that I did not know as much as I thought I did and therefore decided to join ‘The World University of Travel.’  So much did I like this institution that I stayed with it for eight years, during which time I managed to hitch hike around much of the world and learn a great deal about the ceramic expressions of different cultures.

Eight years later, I returned home totally enriched and ready to go. I also returned home with some 12,000 slides and as many stories (as a result I conducted many workshops and illustrated lectures) plus more ideas for ceramic making than I could poke a sticky clay finger at.

Other work: Where to start? At the beginning and one step at the time. I had to. After my travel, there wasn’t any money left in the kitty.

I recall sitting in the Flinders Ranges in an old shed/house I had bought when I was still a teacher, many years before, wondering how I would start without any income.           I borrowed a pottery wheel, built an earth kiln (learned during my travels and research into primitive kiln making) and started to put my first exhibition of work together. It sold out and I bought my own wheel.

All went well during the eighties. I made new work, it was appreciated and sold well. I presented many exhibitions and received much ceramic kudos.

That was until 1989 when a recession (I did not have to have) occurred.

One of the results of this recession was a lack of interest in art in general and of ceramics in particular. It became hard to sell work. I had to change course.

Sculptural work: During one conversation, my mother told me how, as a child, I was always entertaining myself in the sand pit my father had built for me. I decided to revisit this dreamtime activity and started to work with sand. I started small, in the studio, and then sold the ideas I came up with to various Art Festivals. Taking my cue from another childhood phenomena, the landscape painter, I went onto the street and created three-dimensional sand works of architectural details which I observed across the road from where I was working.

As a result of a number of commissions I created aspects of town halls, churches, banks, museums, all pretty exact. This extended project, of being an artist in the street, introduced me to the public on a direct basis. This meant that besides my work in the street I had to deal with all sorts of both positive and negative comments. “What a waste of time mate,” a typical remark. It did not hurt me, although it made me strong and sharpened my wit.

At that time there appeared an advertisement in the Age newspaper for a commission for a public sculpture needed for Swanston Walk in Central Melbourne. I knew at once what I would propose.

A similar piece to the sand works I had been making for a few years now, but then in stone. I drew up the ideas, made up a story to explain the work and send it off. 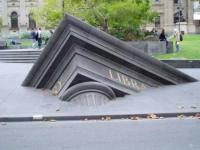 I now made a model, created a budget, drew a set of technical drawings and send all that off.

After a number of interviews I was awarded the commission and the most amazing, adventurous and somewhat scary time of my life had started. It took me a year to get the work out of my head and, installed, into Swanston Street, where it has now been for some fifteen years.

It still is a very popular public art work, and has by now become an almost iconic Melbourne image.

It was recently voted the most popular public sculpture, by a local Melbourne Newspaper. This was the start of my life as a sculptor of public Art works.

However, my ceramic work was still pulling at my heartstrings and I re-connected  with it. I slowly developed and fine-tuned, my bowl making. All my growth and developments happened within the form of the bowl. A theme with variations if you like, not unlike Bach’s Goldberg variations. All the while making connections from other design forms into my bowls.

Continuously being guided by my interest in Buddhist ways. Which in the main advocates being responsible for your own actions plus the recognition, that outside your own head nothing much is happening. In addition my interest in ceramic work took me on numerous journeys both real and imagined.

It was at about this time that I started to become interested in being articulate about my work and work methods. And since with me one thing seems to lead to another, I have, at this moment in time, been writing (for eight years) a column for the local newspaper titled “The Artist’s View.” I just penned my two-hundredth column. As part of this writing aspect of my life I earned a “Writer in Residence Project” also in Korea. A wonderful time which I have extensively written about. Both the 200 columns and the “Korean Odyssey” stories are available as digital productions.

I am not yet old, but just in case I will be one day, and need to remain independent as long as possible, I am working on the biggest project of my life.

It is titled ‘Strong Old Age’.

This project consists of five parts:

Good exercise (daily walk of five kilometres) Good diet (fresh food, no stuff from tins and boxes) Good thoughts (which I keep positive and sane by my work in the vegetable garden and studio and my forest walks).

Good work (work with a creative aspect) and Good Friends (people you can trust with your happiness).

In this way I cruise along my path of life, not my chosen path, but the path that is continuously creating and re-creating itself anew by walking it, by doing it, by working it.

I have no time for regrets, regard dullness as the enemy and am forever grateful for all I receive.

*Each year, when my birthday comes around, I become open to receive a word, although do not ask me where it comes form, it arrives because I ask for it. A word to sustain me throughout the year. I apply it when things get a little difficult. Doing that provides a shift. The year which started 13th October 2003 the word which arrived was ‘Discipline.’. So I designed a project to go with it. I called my mother and asked her what time of day I was born. “Ten minutes to midday” was the answer. For one year, I took a photograph each day at ten minutes to midday. Not of myself but the place or situation I was in. Never missed a day. First few weeks I used an alarm, then it became part of my day. Great project. **For a year or so I ran my own ceramic school. This consisted out of freelance workshops conducted, in the main, in and around rural W.A. from Kununurra to Albany. Time about 1973. 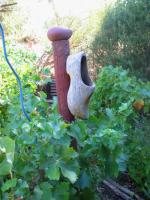