I was born in the Netherlands on 8 April 1937, the eldest of five girls. I was only two years old, when war broke out. My childhood was not free and easy as my mother had three girls between 1937 and 1940. She would constantly remind me that I was the eldest of the family and had to be an example for my siblings. Times were hard we didn’t have many toys and I remember my mother making dolls for us out of material and using papier-mâché for their faces. She also made dolls houses from cardboard boxes with the furniture made from match boxes.  Those were the days.

The war was a time I would rather forget. There was no food. It must have been extraordinarily difficult for my parents. Often, my father went out in the night to steal food for our family, and to try to get coal, wood or old shoes and, in fact, anything that he could get his hands on that he could burn to keep us warm. I recall my mother and us children feeling intense fear when he left on these missions. We were terribly scared that he might get picked up and detained by the German Occupation forces. They would allow no one out after dark.

Mine was a very resourceful mother. I particularly remember the clothes she made for me from the Parachute silk that my father also brought home. However, most memorable was a green army coat. She used every inch of that material to make a warm coat for one of my sisters.

Another strong memory is the excitement I felt when planes flew overhead and began dropping food parcels with all sorts of goodies in them. Oh, the joy of it. Among other things the parcels contained bread and chocolate.  We thought the bread was cake and the chocolate was heavenly.  One night my father came home late with the lining of his coat slashed and the bottom of it was filled with something. He just turned his coat upside down and to our surprise, large potatoes rolled out all over the floor. It was as if Christmas and New Year had come at once.

On the other hand I also recall having to hide my father under the floorboards because the Germans were invading every house to pick up young men to take them to Germany to work in factories. Two of my uncles were picked up. However, they were among the lucky ones that made it back home after war ended. Many others did not.

The sound of sirens so frightened all of us, even now I can hear the sound. I associate that sound with pieces of shrapnel flying everywhere from the bombs the sirens were warning us about. I always dove under the table or hid behind the toilet as soon as the sirens started.

My father had a radio behind his chair from the beginning of war and would listen to the English broadcasts. However, if the Germans found this out he would have been shot. Can you imagine how my mother felt? One evening I found the radio and joyfully told my father, He took an axe and smashed it to pieces. For us they were all very traumatic times that we are all very lucky to have survived. They made us appreciate life as it is now.

When I finished primary school at 13, I began working as a housemaid for a family of seven (7). I did all their housework. However, I had to give all my earnings to my mother to help keep the family finances buoyant. I stayed with my first employer family for some time finally working for another family and this entailed working even longer hours.

I met my future husband in 1953 when I was 16.  We were married on 2 July 1958 after I had turned 21 years.  Eight months later he suggested that we move and begin a new life in Australia.  We arrived in Sydney on 10 September 1959.  Shortly after arriving, we both found work at Amalgamated Wireless Australia, where my husband worked for the next 36 years. During this time we build our home in Birrong and had three beautiful children, a boy and two girls.

I am self-taught in crocheting, knitting, macramé, painting and embroidery.  I began quilting after collecting scraps from the clothes I was making for my children.  Initially by joining the scraps to make small blocks.  When I had made 24 blocks I joined them to make the quilt.  This quilt, with all the scraps from my children’s clothes, brought back 26 years of memories.  The Odyssey Quilt Project is my first involvement with a formal quilting group. 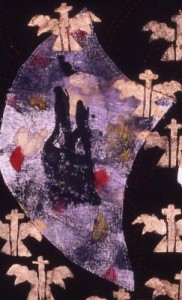 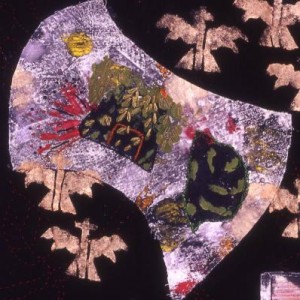 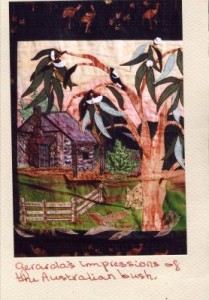 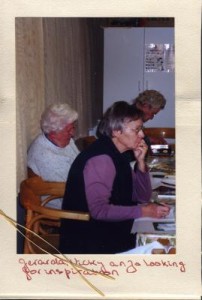 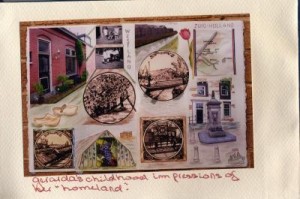