Mathilde is the popular producer and presenter based in the Sydney office of SBS Dutch Radio. 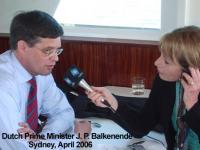 I was born into a colonial family, that has its roots back in the early 1900s. My mother was born in Medan and my grandfather (on my father’s side) was Chief Inspector of Police in Jakarta.

Several members of the family survived the Japanese camps during the Second World War. My parents and my maternal grandparents dodged the bombs successfully in Rotterdam.  My father went back to Indonesia on one of the first military ships. 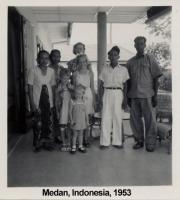 My mother and my two sisters followed, with special permission, some months later.

My birth on the 3rd March 1950 was at the Kraaminrichting in Djalan Semarang in Jakarta, at a time when few Dutch women and children had returned and the doctors apparently found it a pleasant change to deal with a baby instead of soldiers.

We moved to Medan on the island of Sumatra, more familiar ground for my parents.

My memories of Indonesia are vague: we celebrated St Nicolaas and Christmas and all my little friends were from Dutch or sometimes Dutch-Indonesian background.

I don’t think if there were any opportunities to mix with the locals apart from the house staff and their children, who lived behind our house.

We also had special quarters for visiting artists (some quite famous) who were invited to perform for the Dutch community.

I mostly remember the holidays in Berastagi, high up in the mountains where it was cool at night and we were allowed to ride the little horses.

My parents put a stop to that when one of the horses I was on took off with me hanging with one foot in a stirrup.

In late 1956, my parents decided it was time to leave as the political situation in Indonesia became tense.

The boat trip to the Netherlands was a long one, several months.

The Suez Canal was closed and we had to sail around the Cape, but we were on a freighter (the Zeeland) and we had so much fun that a big trunk with toys was never even opened.

We were busy helping the crew paint the ship and assisting the captain navigate our way to Holland.

My middle sister and I were sent to the Van Oldenbarneveld School in Rotterdam.  On the first day at school, shivering from the cold, in our new winter coats and heavy shoes, we were surrounded by a large group of kids, who were anxious to know about tigers and snakes in that hot, faraway country we came from. Of course, that special interest faded soon and we became one of them. Still, life at home was a bit different. We hardly ever ate at 6 o’clock as my friends did and the regular Dutch fare was hardly ever served. “Too boring,” my mother used to say.

Perhaps because of my start in life, I never felt specially connected to the Netherlands. From as far back as I can remember I had decided that I would travel. Having finished High School (Rotterdamsch Lyceum), I embarked on a career in Hotel Management.  I studied in Lausanne, on the beautiful lake of Geneva, and that was the start of many travelling jobs: working on the Holland America Line’s  SS Rotterdam, that at the time did amazing world cruises; being a Rep for a Dutch travel agency on Tenerife (Canary Islands) and Dubrovnik (former Yugoslavia), and finally landing in London.

In London, I studied Marketing and returned to the hotel business, working as a Sales/PR Manager for one of the Rank Hotels. One of my colleagues, Barbara Harris, met the famous actor Gary Grant in her hotel. She married him quite soon after. She became his last wife!

I also met my husband, Robert Swift, an Australian journalist (who worked for Rupert Murdoch’s News Corporation), at a function at work.  He was a lot less famous or rich, but quite a bit younger and more dashing! He took me on one of our holidays to Perth, where he mostly grew up, and we had a fantastic time. But life in Europe seemed more exciting. We married in 1978 at the journalist’s church “St. Brides” near Fleet Street. Robert’s daughter, Nicole, from his first marriage joined us soon after.

A year later, we ended up in Amsterdam (Robert working for the American agency Associated Press) where our first daughter Emily was born. It was an exciting time with the inauguration of Queen Beatrix, squatters and riots, and angst over theatre nuclear weapons and submarine sales to Taiwan. After the flurry, however, for Robert the Netherlands proved to be limited for a journalist. Possibilities in Sydney came up and a future in Australia, now that we had a fully-fledged family, might be the go. I flew into Perth on 27th May 1981.

Daughter Lauren was born three years later. I realised that it wouldn’t be that easy to slip back into the type of work I had been doing before. Being a woman and specially a mother in the ’80s was still a negative factor. In a short list interview for a Marketing Manager job with a large foreign Airline, I was asked how, being a mother, I would manage such a demanding job.  My answer that ” if Margaret Thatcher can do it, I can too”, didn’t help. I filled my time obtaining a Travel Consultancy Certificate and doing all kinds of part-time jobs.

In  1991, I decided that it was possible to have a total career change. That’s when the SBS tuned in for me. The radio side of SBS operated at the same time as 2EA in Sydney and 3EA in Melbourne.

I started with a 7 hours-a-week job as a broadcaster for 2EA and spent double that time helping out in the office, and following courses and improving my skills. Theo ten Brummelaar was the Head of the Dutch Language  Program.  Soon I filled in for him when he went on holidays, and on his retirement all positions became vacant and a restructure took place. 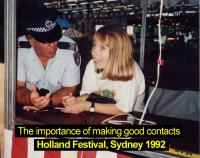 I won the Head of Group position, which had now become a full time job.  2EA and 3EA became SBS Radio and the programs became national.

With the fast changing technology, we moved from tapes and cassette recordings to digital recording and editing, from operator assisted program to self operation.

The listeners have changed too. Their expectations have grown and are diverse. There is a need to hear about the past, a need to confirm our cultural background, our sense of humour.  But I see also the need to get another Dutch – or if you like European – look at events and views, whether they are social or political, to confirm our way of looking at things.

In late 2005, I had the opportunity to work with Radio Netherlands on a series of co-productions to mark 400 years of Netherlands-Australia relations. I spent a month in the Netherlands researching and interviewing while my colleague from Radio Netherlands did the same in Australia. The result was a series of  “mirror-programs” about ageing in a country where you didn’t grow up, and education and mixed marriage. The people who started the Dutch language programs at SBS were pioneers. People like me are the keepers and I certainly feel an enormous responsibility to follow it through.

There have been highlights in my work with SBS Radio, ranging from the interviews with Bishop Tutu, Prince Willem Alexander, several Prime Ministers, famous artists and sports people like Pieter van den Hoogenband and Inge de Bruijn. There was too the Aboriginal man who was adopted as a baby by a Dutch family and later returned to Australia, where he experienced for the first time real racism. And there were the Dutch holocaust survivors who told me their stories, stating facts quite unemotionally, while I had the greatest difficulty in not falling apart. I did a program about collaborator’s children, all adults now, who to this day feel the guilt of their parents.  After the program, a man called in. He was in tears. He told me how he was one of these children and felt he had to flee his own country because of the wrongs of his father. The stories that matter and really move you are often not with the famous, but more the unexpected human ones.

Radio is as far as I’m concerned an amazing media. It can entertain and inform but at the very best it can stir, move you, give comfort or even bring people together. When that happens – it’s magic.

By the way, I’m getting ready for a long awaited trip to find my roots. After 50 years I’m going back to Sumatra to look at the city and the street and home where my first memories stem from. I know I’m not going to be disappointed. I want to climb onto one of those horses in Berastagi and this time I’ll really hold on tight.