I was born in 1918 to a Dutch father and German mother.  I was educated in Germany, where I lived and enjoyed a comfortable family life until the depression began.  Due to political unrest, my father decided to take the family to Holland, not an easy transition to make for a family with four children.

On 10 May, 1940, Germany declared war on The Netherlands.  I had been married for three days and what should have been beautiful and happy times ahead, became a time of sorrow and frustration. I was married in 1940, three days before World War Two broke out.  My memories of five years of occupation are 8pm curfews, rations of essentials and boredom.

Food was rationed, as well as shoes and textiles.  At night our windows had to be blocked off with black paper as the curfew started at 8pm.

In Groningen, where I lived, the food situation was not as bad as in other parts of the country.  We could go to the farmers for milk and wheat.  We milled the wheat in a coffee grinder and then took it to our baker who, for a small fee, would turn it into bread.

At night, English planes would fly over our city on their way to Germany.  The sirens would sound.  During these times we needed to be dressed and ready with our papers in case we had to flee, as sometimes bombs would fall into our area by mistake.

The war lasted for five long years, and I have seen and experienced much heartache, tragedy and sadness, which I would prefer to forget.

The winter of 1944/45 was the hardest, and was exceptionally cold winter.  There was not much fuel to warm our houses, gas was only available for a few short hours a day and the food situation became critical.

During the occupation we were forced to surrender our wireless, meaning that we were then unable to listen to the English news.  Our Queen was in England and messages of hope and strength would regularly be broadcast, sometimes in code.  People who had defied the wireless ban would listen in secret and these messages would be relayed around the neighbourhood, giving much hope and strength.

We all tried very hard to help one another and to make the best of a very difficult situation.  We had to make do with surrogate tea and coffee and clothes would be recycled, with a continuous effort to make new out of old.  Nothing was wasted.  Ingenuity and imagination were the flavour of the day.  Pushbike tyres were made of rubber garden hose and worn shoes would be repaired with wooden soles.

When finally the much longed for liberation came in May 1945, our red, white and blue flags appeared everywhere.  People, who had gone undergound returned from their hiding place and many street parties took place, celebrating our longed for freedom.

After the liberation, the rebuilding of our country began.  However, extreme housing shortages and continuing rations made life difficult.

We wished for a better life and 1950, were tempted by advertisements for people to come to sunny Australia.  With the promise of a fresh start, we packed up and moved to Australia with our daughter that year, to begin a new life.

I have always had an interest in fabric and craft, and have taught knitting, and taken folk art classes.  I joined the Epping Quilters in 1984 after reading an advertisement in the local paper.  The group makes quilts that are donated to children staying at Westmead Children’s Hospital.  The group also produces quilts each year that are then raffled with proceeds being donated to a selected charity.  These quilts have been exhibited at the Epping Art School.  Originally the exhibition was held every year, however it is now held every three years.  I was also a member of the quilting group that included Frances Larder, which designed and created two quilts for the Para-Olympics in 2000.

As I was writing this short story of my wartime experience, I reflect with much sadness upon current troubled times and I wonder, “when will we ever learn”. 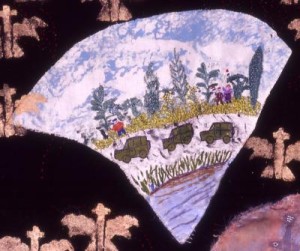 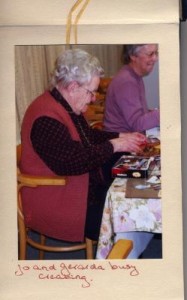 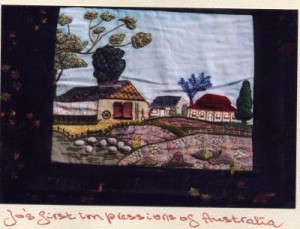 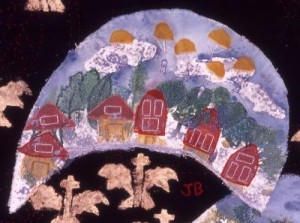