When I was 4 years old, my parents decided to leave Holland and go to the Dutch East Indies.  That was in 1947.  My father had a Doctorate in Eastern Linguistics and had better employment opportunities there than in the Netherlands so soon after the War.  And so my parents and my sister and I travelled half-way around the world in the hold of the Johan van Oldenbarneveld to a new adventure.

My earliest memories of Holland are of a grey and damp place and so I took to the tropical extravaganza of colour, smell and taste like a duck to water.  The ten years we lived in Indonesia laid the foundation stones for the rest of my life.

The shrinking Dutch community provided few friends and once found, they all left before we did. Instead, I was happy to wander through the paddy fields on my own and observe the little fish swimming between the rice stalks; the water weeds that turned silver when you held them under water; bugs, frogs and the occasional snake, doing what they do when all is well with Nature.

From the age of six I searched for and collected ‘interesting’ pebbles and was later much encouraged by the palaeontologist next door. I still have a fossilised sabre toothed tiger’s tooth!  Most of all I liked to wander through the local kampong – with the freedom of a child where I could observe the people around me and sometimes even join in.

In 1957 my father, with two daughters to marry off, and my mother for the warmth, opted to immigrate to Australia, land of sunshine and MEN!  On June 2, 1957, Lloyd Triestino’s ‘Neptunia’, with us on board, docked in Sydney Harbour.

After nine months at Scheyville migrant holding centre, we settled in Normanhurst and both my sister and I did the Leaving Certificate at Hornsby Girls’ High School.   It was mainly because I had elected to do Biology instead of Physics and Chemistry necessary for a Science Degree, that I chose a career in Physiotherapy.  It seemed a natural career choice, for I had already joined a Spastic Centre Younger Set, had always observed people going about their daily chores, and intuitively knew how the body moved and what it could do.

My father’s dreams came true when in 1966 my sister married her Aussie and the following year I brought my Brian home. I was now fully integrated into the Australian way of life. I had good command of the language and had absorbed the subtle changes in customs from my peers. Even Saint Nicholas shrank and changed and started coming at Christmas time.  When our son  was born at the end of 1967 and our daughter in 1969 I never considered speaking Dutch to them – something I now regret.  The only Dutch they heard was when we visited my parents.

Brian was an engineer with the Department of Main Roads (DMR) and initially we were moved every couple of years or so. Our first country posting was to Orange and we both loved our two years there. Our oldest friends date from this period. We joined the local Lapidary Club and, first with one baby and later with two, we went camping all over NSW and Queensland and beyond. My fascination for the weird flora and fauna of Australia grew into a deep love.

We continued these camping and Lapidary trips during our four years in Tamworth, in the mid-‘70s, but also became increasingly involved in Scouts.

In 1980 Brian took leave without pay from the DMR and the four of us had three interesting years in Papua New Guinea. Just as well that Physiotherapy is universally in demand!  School and work routines were broken by a couple of bird-watching trips, a trip through the Highlands and to Medan and many Sundays spent snorkelling.  I spoke Pidgin English and took great delight in the storytelling skills of my hausmeri (helper).

It wasn’t until 1986 that I went to art classes at the local evening college.  Up until then lapidary and silver-smithing had been my main hobbies. I really liked the teacher and loved what I was learning.  I wanted more and went to TAFE.

In 1989 a Certificate course in Art at the Tertiary and Further Education (TAFE) College in Sydney was interrupted by a three-year secondment to Jakarta for Brian’s work.  No physio. work for me there – as they don’t employ expatriate physiotherapists – so I followed various art courses and participated in a weekly drawing group of women of the Dutch community.  With two of these friends I helped organize a joint exhibition of our works in Erasmus Huis, Jakarta, in 1992, just before returning to Australia.

Back in Australia, rather than do a physiotherapy refresher course, I decided to say  goodbye to my physio career – which was quite a wrench! –  and to concentrate on art.  I re-enrolled at Hornsby TAFE for the Diploma Course.  This whetted my appetite sufficiently to continue on to University and graduate with a Bachelor in Fine Arts, with Honours  (UNSW).

Although it took a further five years after my career change before I let my physiotherapy registration lapse, I am happy with the decision and am fully committed to my art.

Have I personally contributed to the society in which I live?  Yes, I have.   I became a ‘joiner’ quite soon after we came to Australia: first a Church group, then the Spastic Centre Younger Set, Lapidary Clubs, the Scouting movement, the Cranio-Facial Foundation in Jakarta, the Hornsby Art Society. As I don’t mind ‘getting my hands wet’, this has usually involved a position on the Committee.  I have been a Committee member of the Hornsby Art Society for over 10 years, including two years as President (2000, 2001) and one year as Vice President (2006).  I have run a weekly Life Drawing group on a voluntary basis for the last five years; I am a Board member of the Dutch Australian Cultural Centre (DACC) and am involved with the Dutch ‘Dolls Project’ (see DACC website). www.dacc.org.au 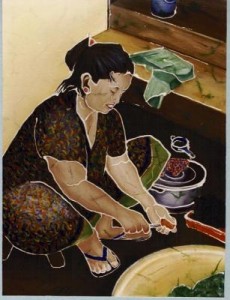 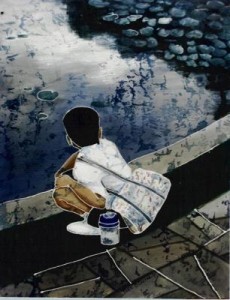 One of the courses I did  in Jakarta was ‘Batik Tulis’, which I then adapted to canvas and acrylics. My genre paintings in the exhibition there were predominantly in this technique.

Back in Australia, however, I could not reconcile this technique with the local environment and I turned more and more to drawing.  Then I found some broken shells lying on the beach.  When I  realised these had eroded out of an Aboriginal midden, my soul suddenly sang!  These shells, remnants from ancient cooking fires, which had lain buried for thousands of years, have became the symbol of my connection to this wonderful land.

For nearly ten years I have used these broken fragments extensively as inspiration for my works. By mainly using charcoal, various black pencils and graphite, I allude to the charcoal-rich grave from whence they came. This has also enabled me to explore to the fullest each medium’s characteristics in relation to the others’ and to the paper.

When I first came upon these broken shells, I was totally enthralled by the sensuality of their shape and the movement of space as it tumbled in and around the exposed sections of the chamber.  I found this keyhole view into an abandoned refuge strangely moving.  Deep within the body of the shell was a place of solitude, an escape from the worries of the world.  By means of the large scale and sculptural form of these drawings, I hope to invite the viewer’s mind to explore the secret corners of these ancient shells.

Originally my drawings were inspired by a direct response to the sensual beauty and delicate texture of these broken shells.  Later they became an expression of a deeper understanding of their particular history and of their general symbolic significance.

My present obsessive and almost religious relationship with these shells will hopefully continue to inform my work in the future. 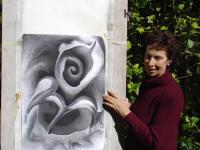 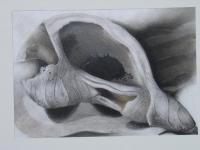 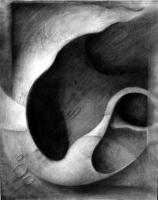 www.dacc.com.au  [go to ‘Dolls’ for the Dutch Doll’s Project]